The Laboratory of Molecular Biology in Cambridge used the CellMaker Regular to increase protein expression yields of a 44kDa His-tagged protein in Pichia pastoris in a rapid, proof-of-concept experiment. Details of their experiment and results are outlined below.

Pichia pastoris is a strain of yeast that is very often preferred to Saccharomyces cerevisiae, other yeast strains, and E. coli because it generates more human-like glycosylation patterns / structures within recombinant proteins. As a result, it has become a major method of recombinant human protein expression. Expression is driven by the tightly regulated AOX1 promoter, which is induced by methanol. Secretion of recombinant protein (directed by a signal sequence) into the media simplifies the downstream protein purification process.

The target protein (44kDa) contains a C-terminal His-tag. It is secreted into the supernatant using alpha-factor signal sequence. The expression levels are very low (<50 ug/L) when produced in shaker flasks. A modified BMMY media was used and supplemented by the addition of 1% MeOH and 0.1% glucose every 24 hours.

The table below outlines the settings and readings from the Cellexus CellMaker during this experiment.

The data generated here shows that the 2-fold increase in expression levels of protein can be quickly achieved by switching from shaker flasks to a single-use bioreactor in a proof-of-concept of this type. With additional optimisation using the CellMaker it is likely that the yield of protein will be further enhanced. Scaling from the 8 litre unit to the identically designed 50 litre unit may offer a further 6-fold increase in yield. 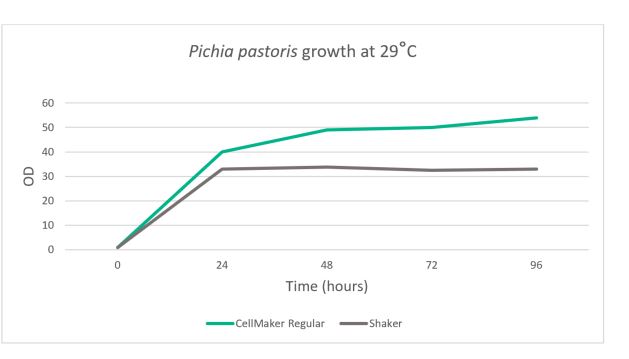